The pride of an artisan-builder

Home/The pride of an artisan-builder
Previous Next

The pride of an artisan-builder

Those who are following my blog since a few years, will absolutely have read my earlier posts about the Belgian artisan Dirk Mortier. Dirk designs and creates beautiful wooden rural outbuildings, home extensions, fences and accessories, all related to the traditional Flemish country outdoor living and landscape architecture.

Dirk is a true craftsman who loves authenticity. Every new project is a new challenge, which makes him constantly end up in his collection of historical books in order to obtain the necessary background information and details about the project that has to be realized.

As Dirk’s workshop is located only a 10 min. walk from our home, it is always a pleasure to bring him a visit and to see what he’s is working on.

At this moment Dirk is working on a huge oak construction, a so called ‘dovecote’ or ‘pigeon tower’ or in French ‘a pigeonnier’ ( like that French word a lot 🙂 ). 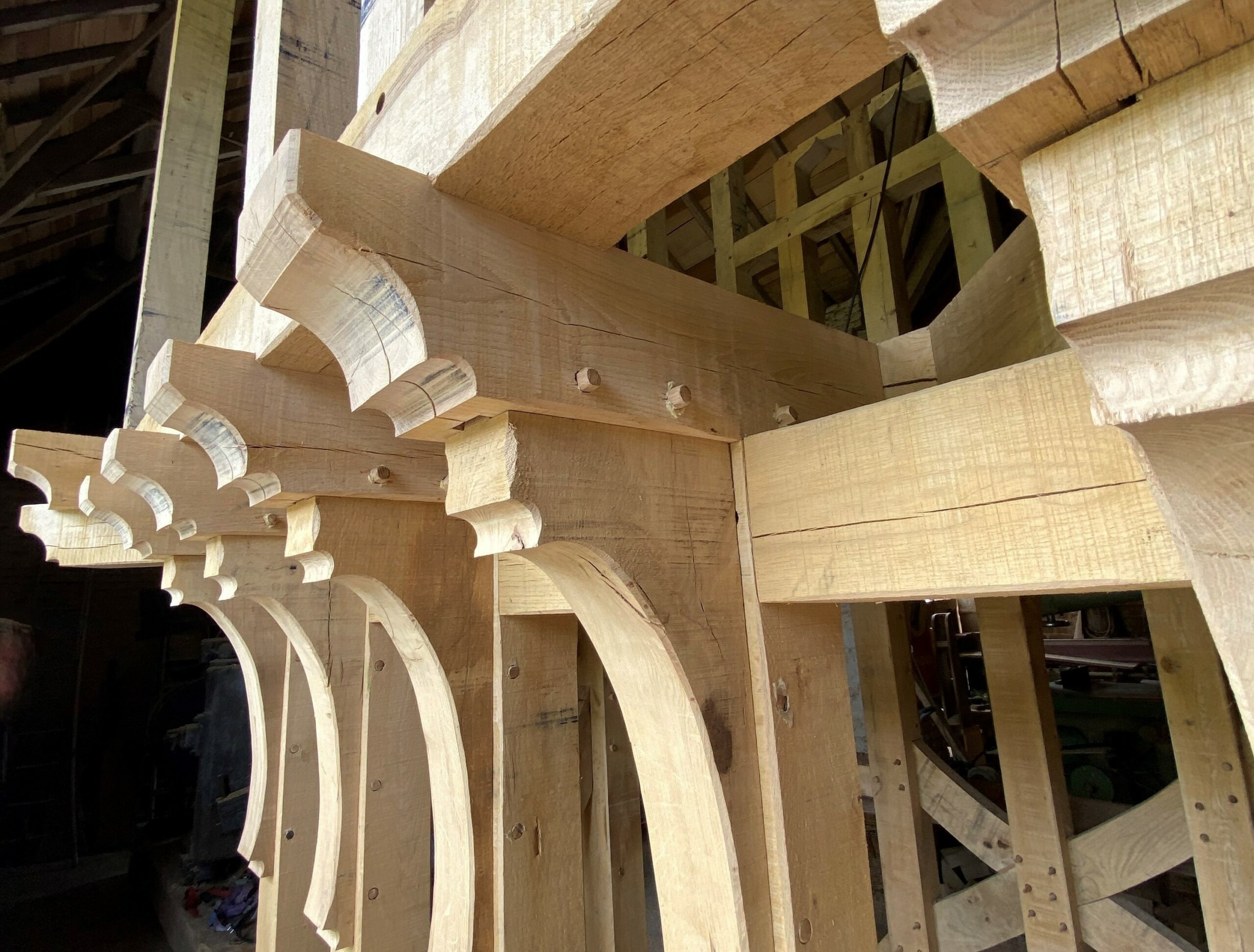 A dovecote is a structure intended to house pigeons. Dovecotes may be free-standing structures in a variety of shapes, or built into the end of a house or barn.

The pigeon tower under construction here in Dirk’s studio is made according to the time-honoured and artisanal technique of timber frame building.

“This technique means that we do construct an oakwood truss, which is divided into so-called frames. These frames are filled with clay (loam), just as was seen in the Middle Ages.”, explains Dirk.

This pigeon tower is based on a plan of similar pigeon tower being part of the Belgian farmstead ‘Hof Elishout’ dating back to the early 17th century and that Dirk had found in the map book of the Belgian Abbey Vorst in Anderlecht. The style of the doors and pigeon holes is adapted to the Tudor style, corresponding the style of his client’s home.

A lot of large medieval farmsteads had their own pigeon tower. Even in later times, they were found within or close to manors across Europe. Many ancient manors in France and the UK have a dovecote still standing or in ruins.

‘Besides fish, swans and other poultry, pigeons were a very important part of the food chain and food supply for the ‘rich’ tables of the Middle Ages. Kitchen bills of the nobility in the 13th C. indicate a wide use of roast pigeons, often occupying an honourable place on the menu. The presence of a pigeon tower was a sign of wealth, a symbol of status and power and was reserved for noblemen, abbeys and monasteries.  Later on, leaseholders and tenants were also allowed to keep pigeons, but had to donate half of the proceeds to the landlord.’, is Dirk telling me in his typical, always animated way. 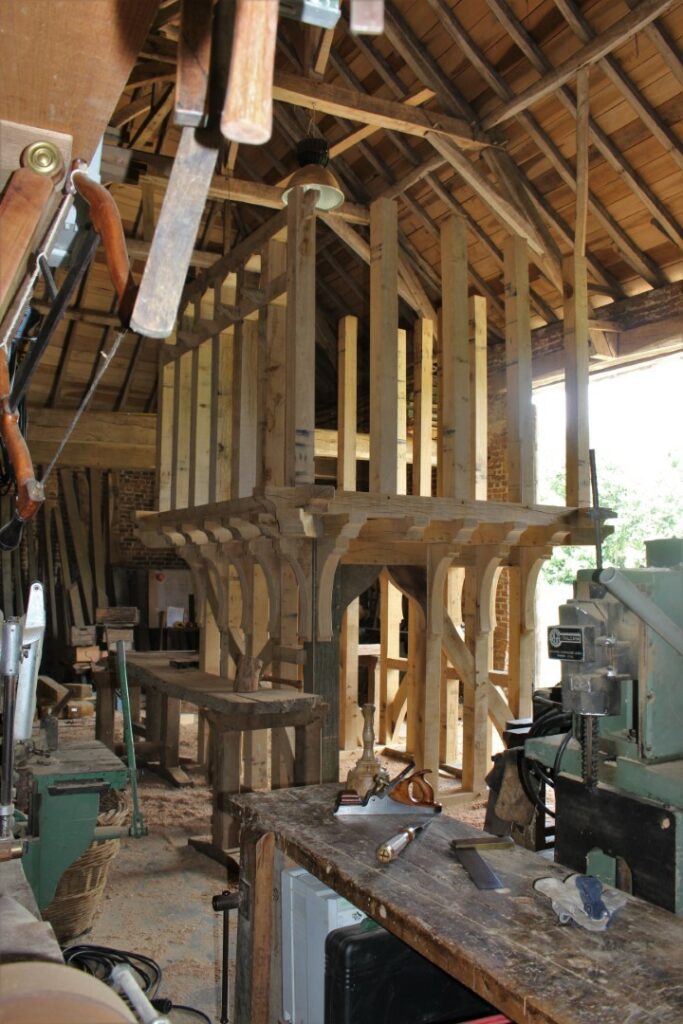 The ‘pigeonnier’ under contruction in Dirk’s studio. 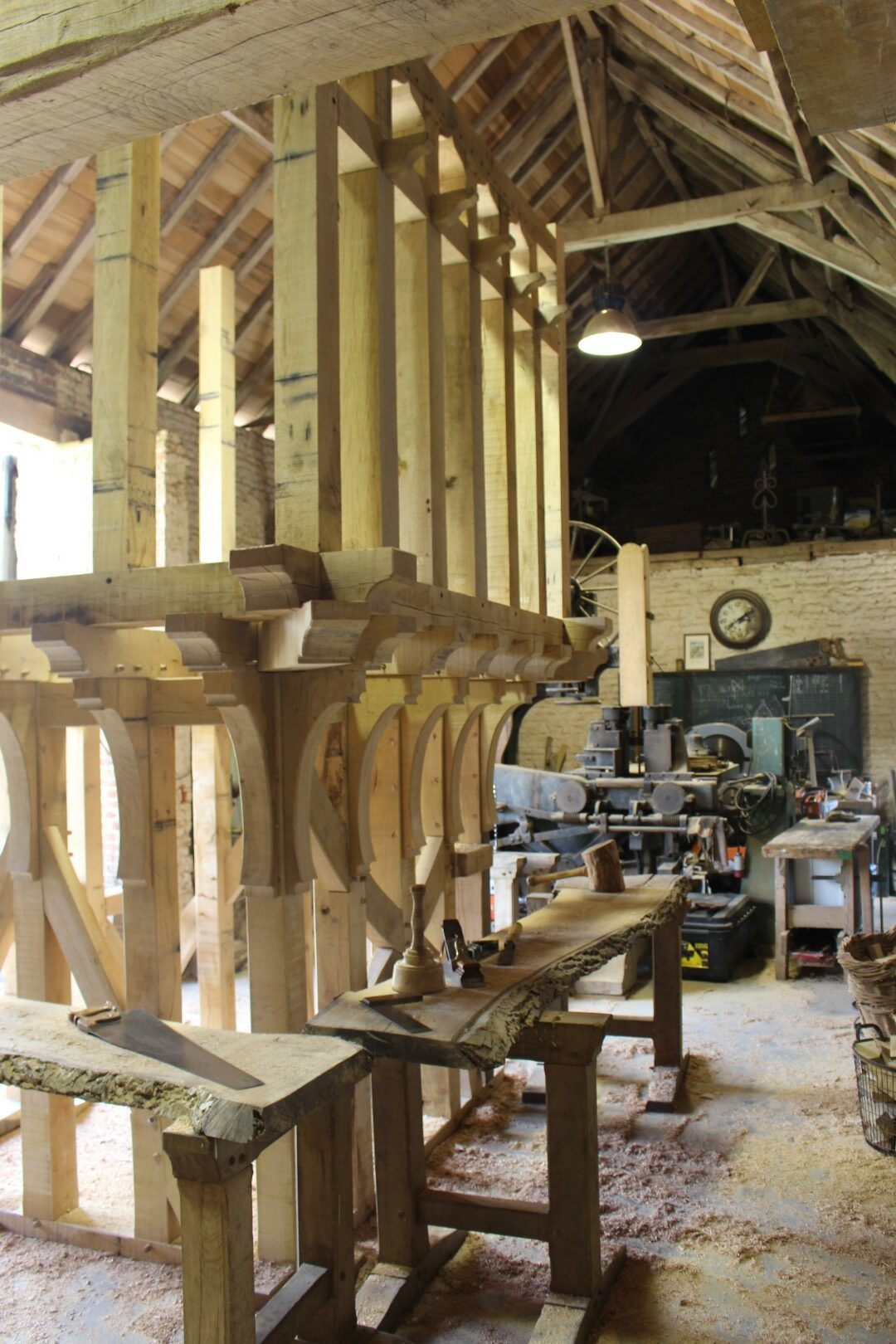 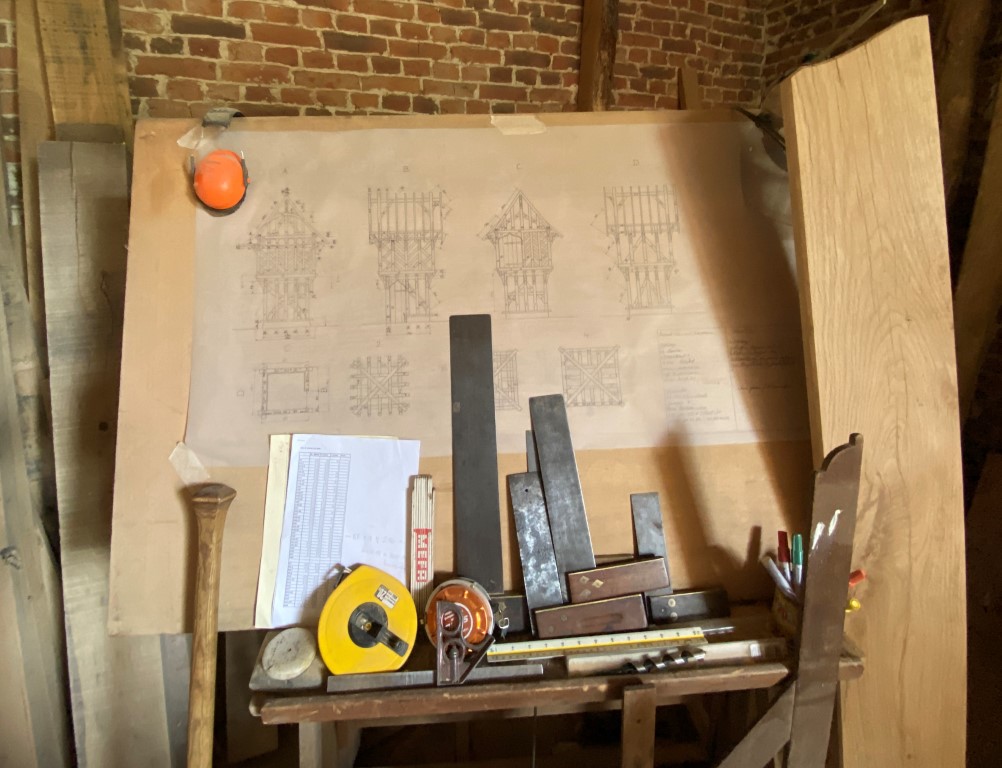 The construction plan of the pigeon tower on Dirk’s drawing table. 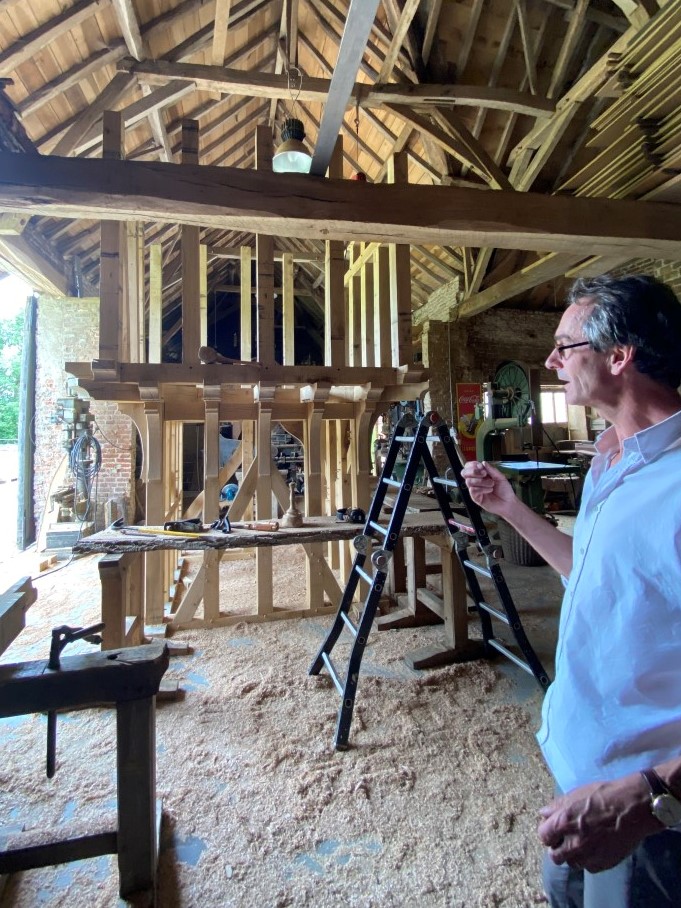 Dirk Mortier proudly telling us all about the realization of his tower construction. 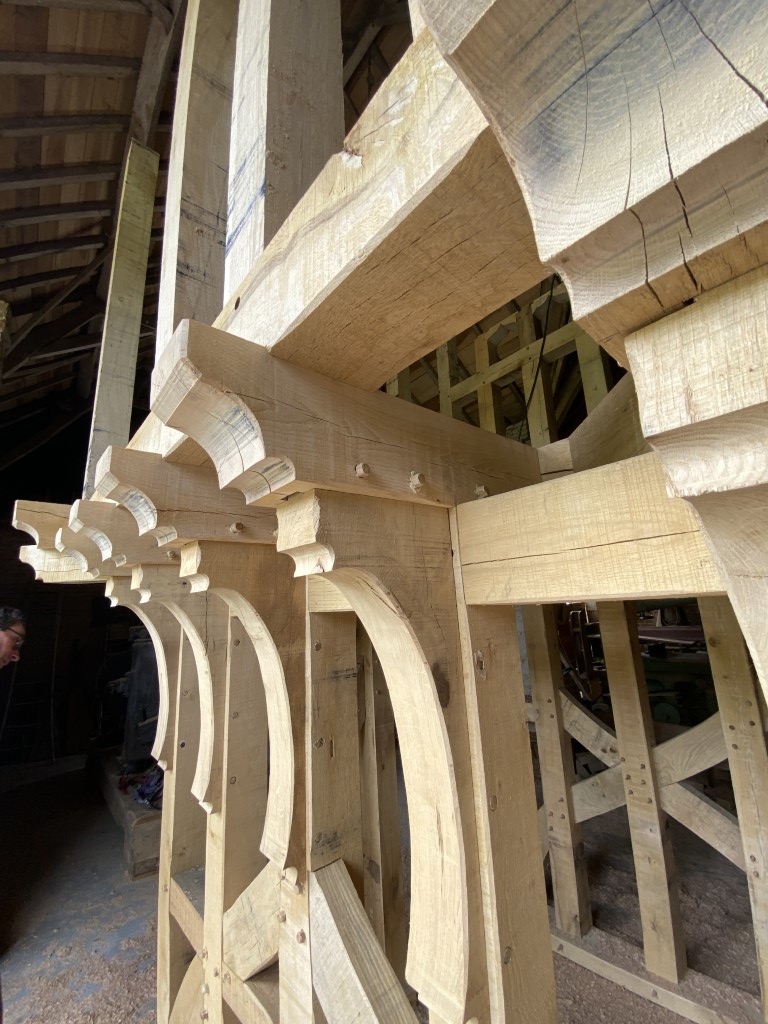 Starting from the necessary functionality, Dirk knows like no other how to add the perfect aesthetic details to his creations. Notice the functional bearing braces here, given gorgeous decorative details. 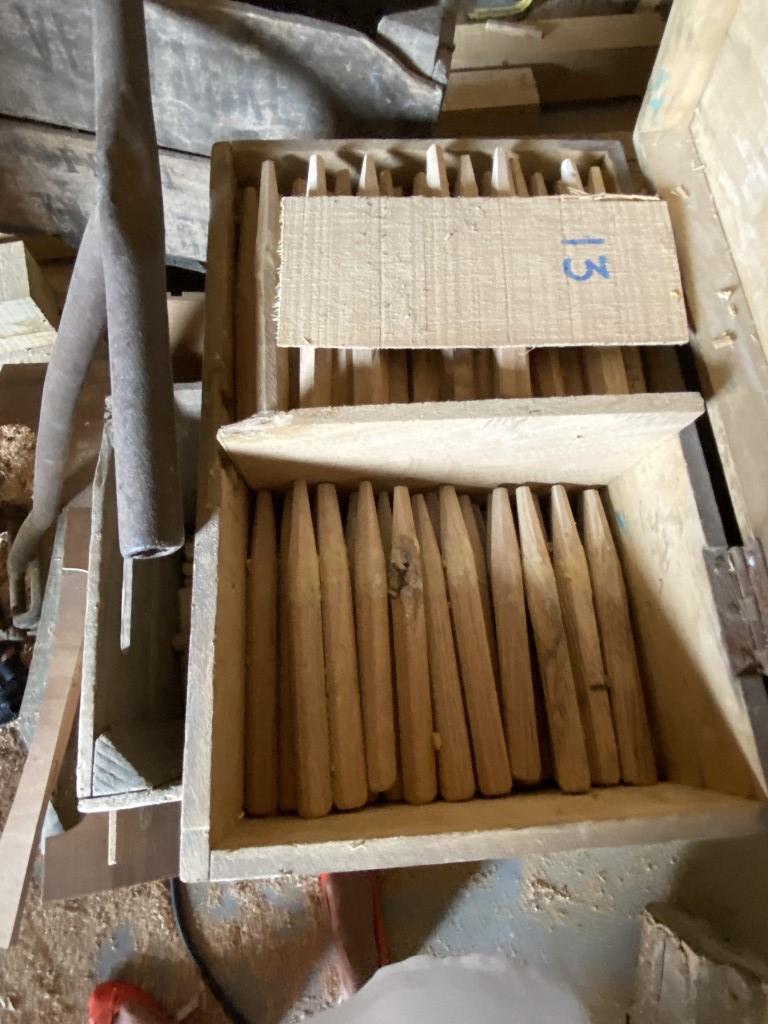 A box of wooden pegs to hold the mortise-and-tenon joinery together. 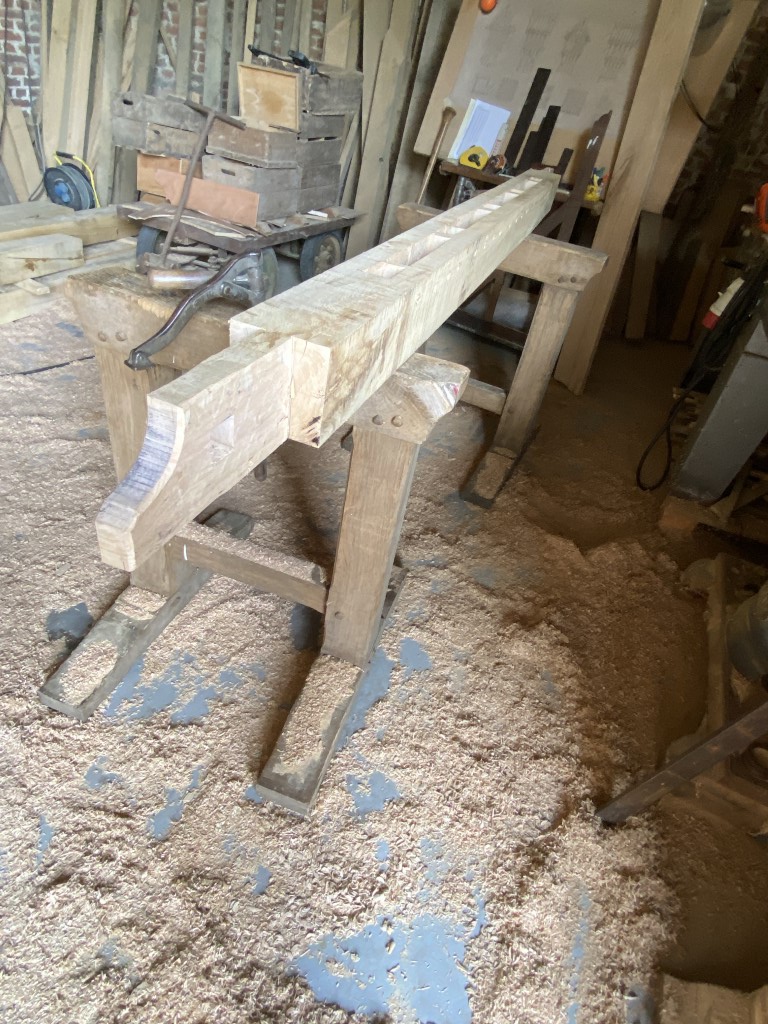 This is one of the beams of the façade that has to be placed above the pigeon holes. 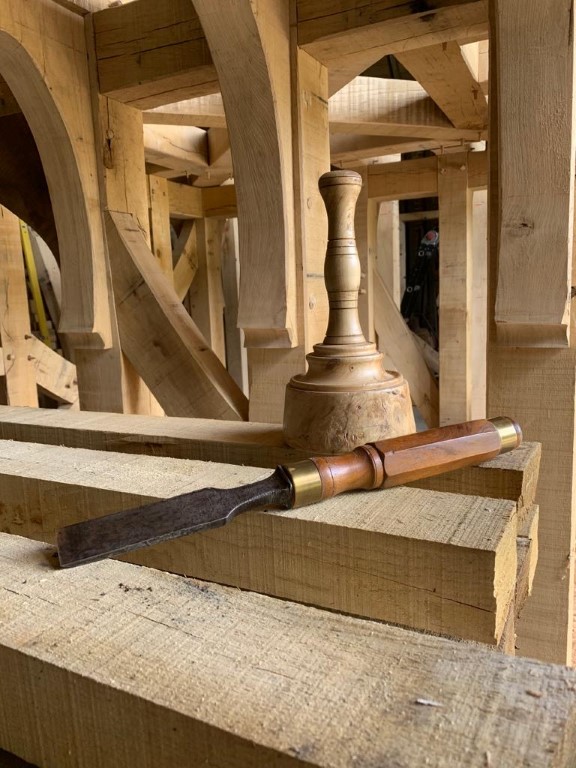 Tools used for the construction of the tower! Gorgeous tools, both pieces of art! A holly turned joiner’s hammer, homemade by Dirk himself. And a 19th C. chisel of which the handle is made by Dirk from a piece of a Mulberry tree that stands in the world-famous garden of Great Dixter House in Sussex. Dirk was offered a branch of this tree by the home gardener he met on one of his visits! 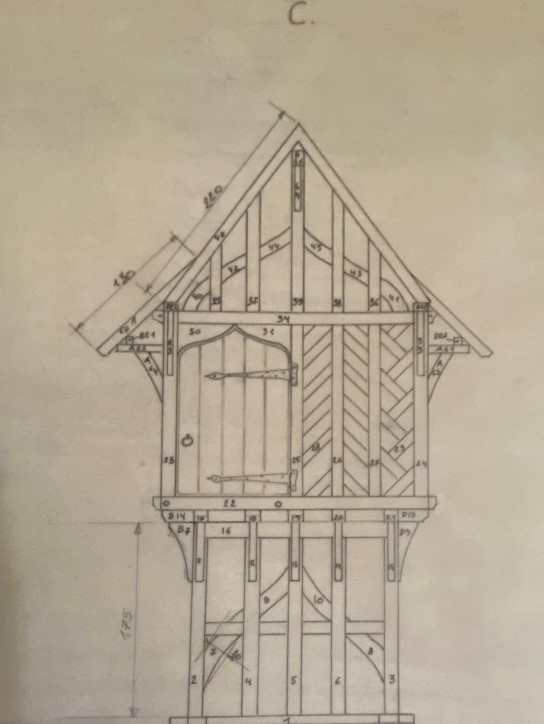 Drawing detail of the pigeon tower, where you can see the Tudor-style elements. 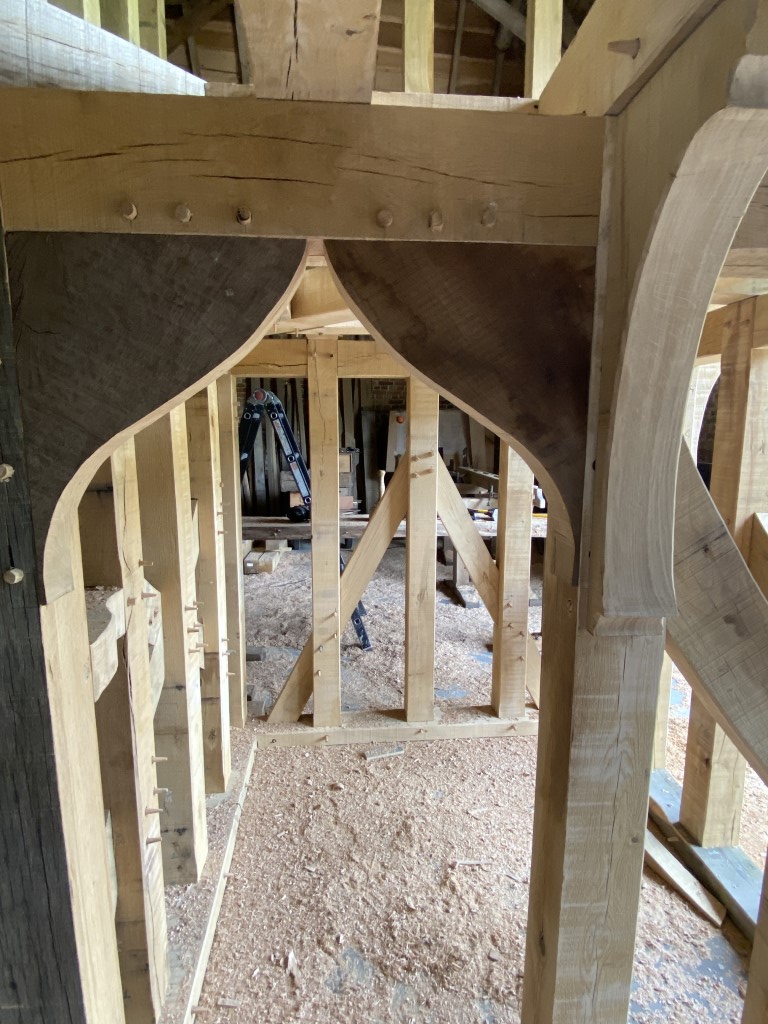 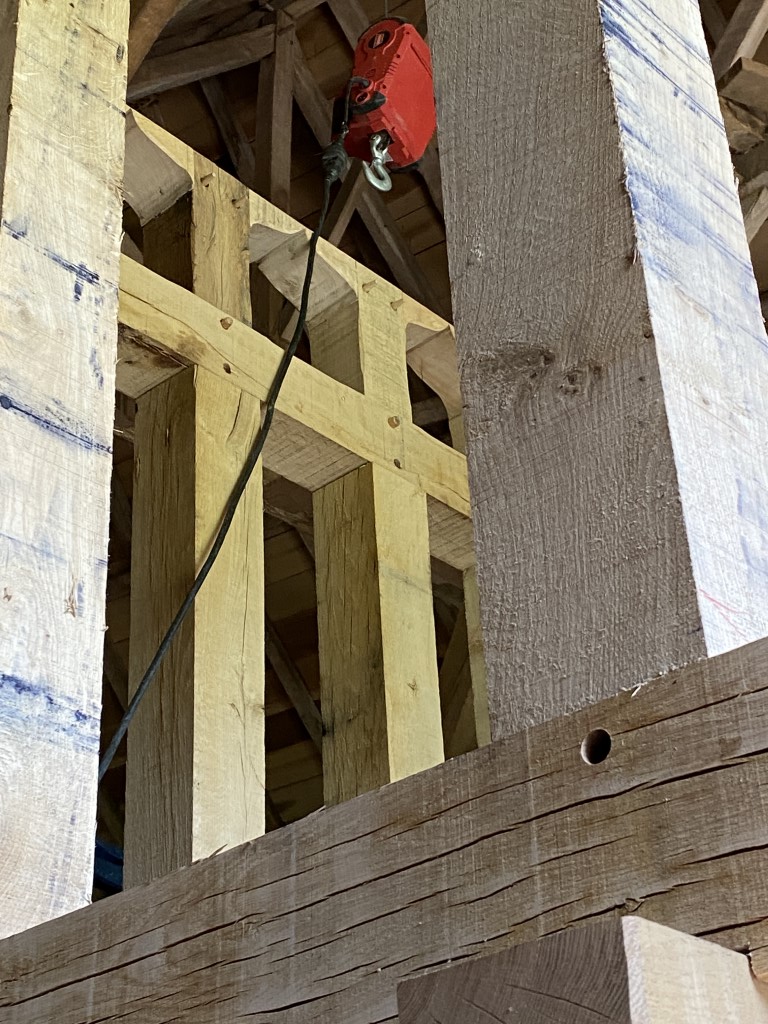 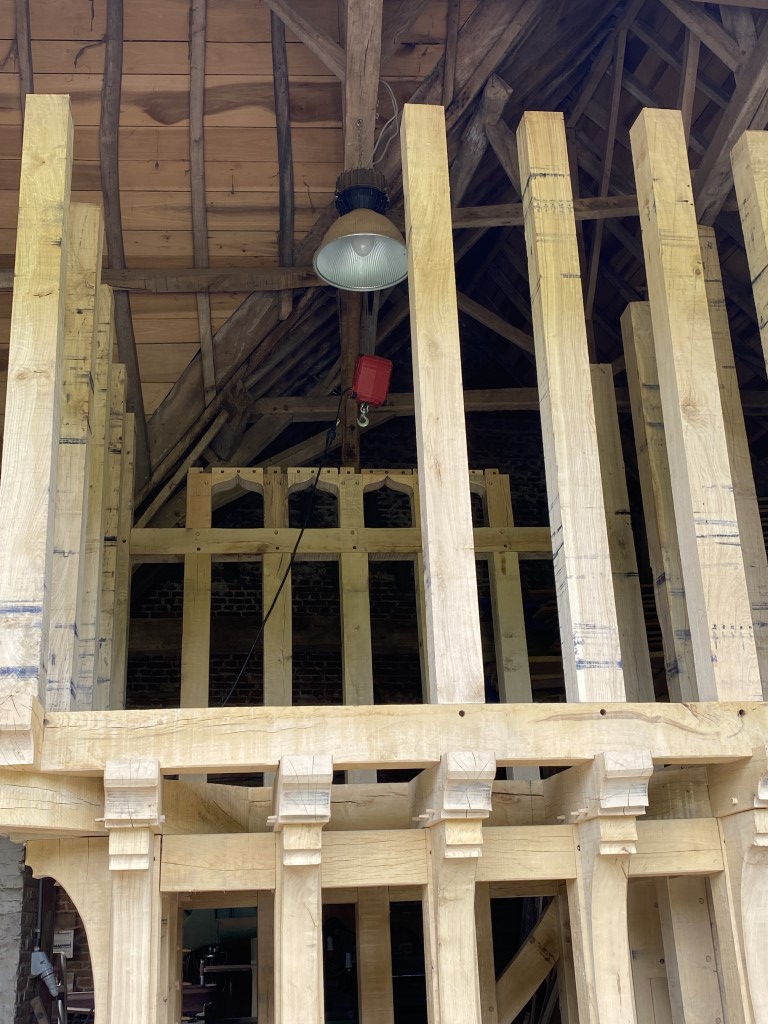 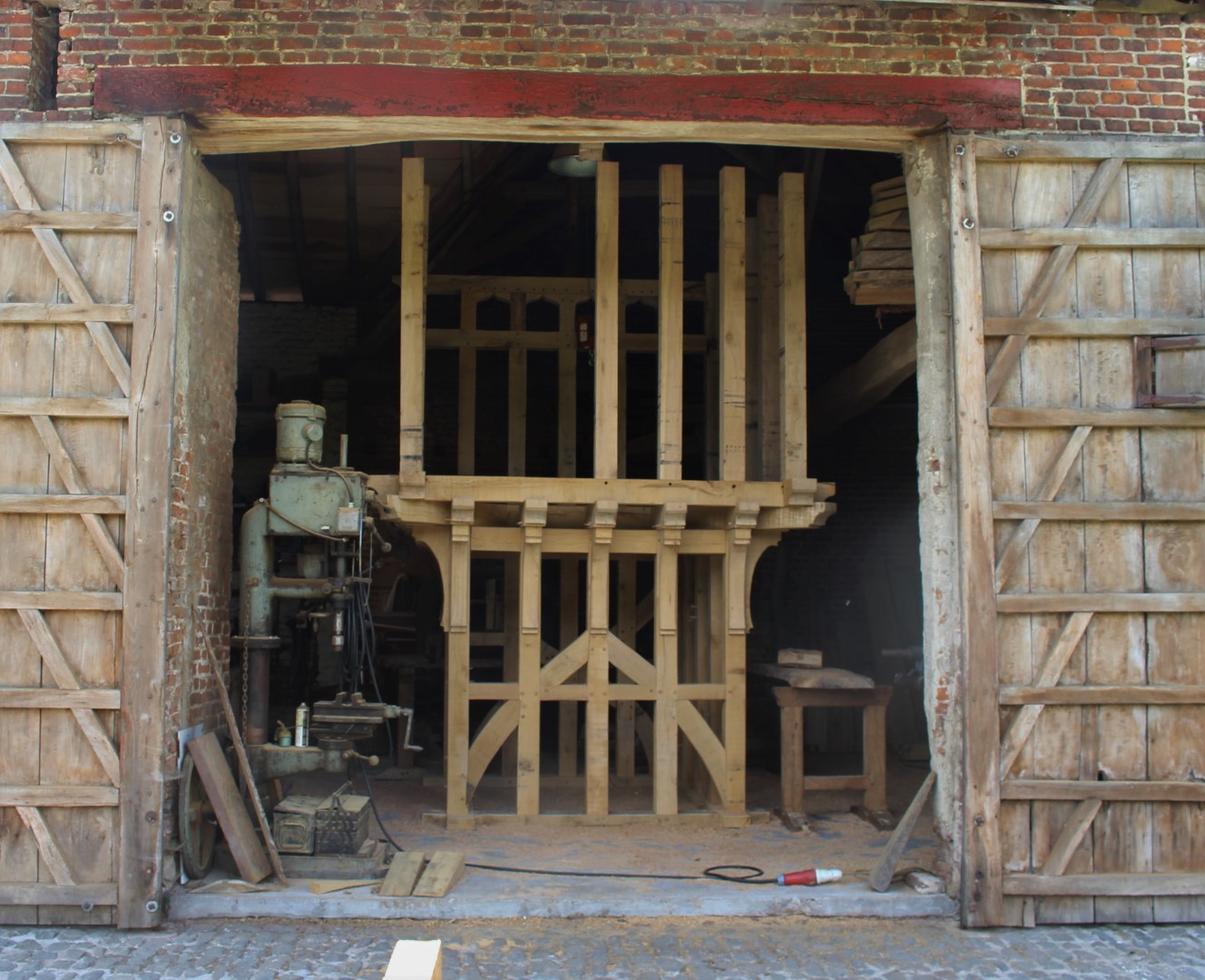 A view to the pigeonnier, standing in Dirk’s garden. 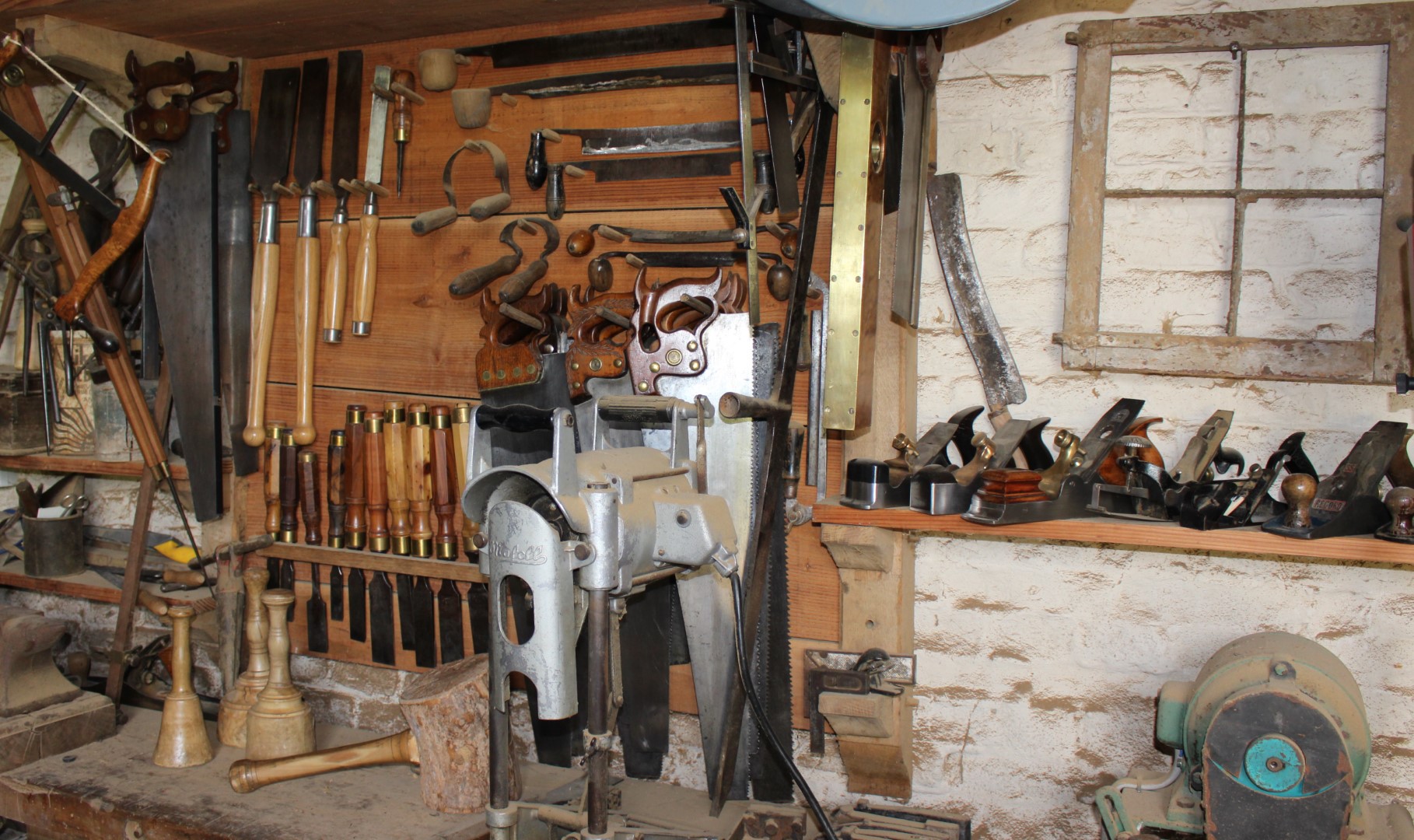 I couldn’t resist to post this picture of the artisan’s collection of tools as chisels, hammers and hand planes. Gorgeous eye-catchers when entering Dirk’s workshop.

To end this post I posted a short video of Dirk entering his studio, where you can see the pigeon tower in progress. Turn on speaker to hear the silence! 🙂